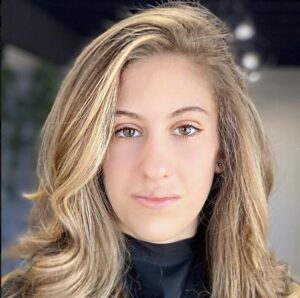 The International Mandela Effect Conference (IMEC) is a 501(c)3 nonprofit organization, based in Branford, Connecticut. IMEC was founded in 2020, and has organized online and in-person conferences. This year’s golden Mandy award was presented to high school junior Bri Bennage by IMEC board members: Cynthia Sue Larson, Chris Anatra, Jerry Hicks, and Shane Robinson on a livestream event on the International Mandela Effect Conference YouTube channel.

Golden Mandy recipient Bri Bennage said, “I have a wonderful teacher, Miss Taylor. She got in contact with TED talks for TEDx Youth, so the debate students are able to do TED talks. I had watched them the past two years since I’ve been at the school.

“Toward the middle-ish of the year, we had our classmates vote on some topics we could talk about. I knew in the back of my mind, no matter what three topics had been voted for, I’m still doing the Mandela Effect.

“My generation is a lot more into conspiracies and stuff, where we are trying to figure it out in our own brains. I’m so adamant that I remember this is what it was—no one could change my mind. My generation and my classmates are a lot more aware of it, but not everyone. I don’t think everyone is saying ‘Berenstein Bears, Nelson Mandela—Whoa, this is crazy!’ but I went over (Mandela Effects) with my best friends, saying, ‘You need to listen to me; you’re going to freak out—you have no idea what I found today!”

IMEC Vice President, Chris Anatra, asked Bri about her plans for the future and Bri replied, “I do acting, and another thing I’m looking at is double majoring in forensic sciences and investigation.”

IMEC Founder and Treasurer, Jerry Hicks said, “Detective work really is what we do as researchers. We’re getting all the facts we can and putting it together to try to make a conclusive idea. And when you’re trying to apply logic to an illogical situation, that’s when it really gets fun, right?”

The International Mandela Effect Conference (IMEC) is producing monthly “Open Tables” livestream events this year, to help promote awareness of the Mandela Effect in keeping with its mission to inspire, empower, and unify all curious observers. Through the evidence presented as the Mandela or Quantum Effect we bring into this phenomenon’s own alignment truths which have proven themselves timeless in all religions, spiritual practices, and scientific findings. Together we Go. Together we Grow.